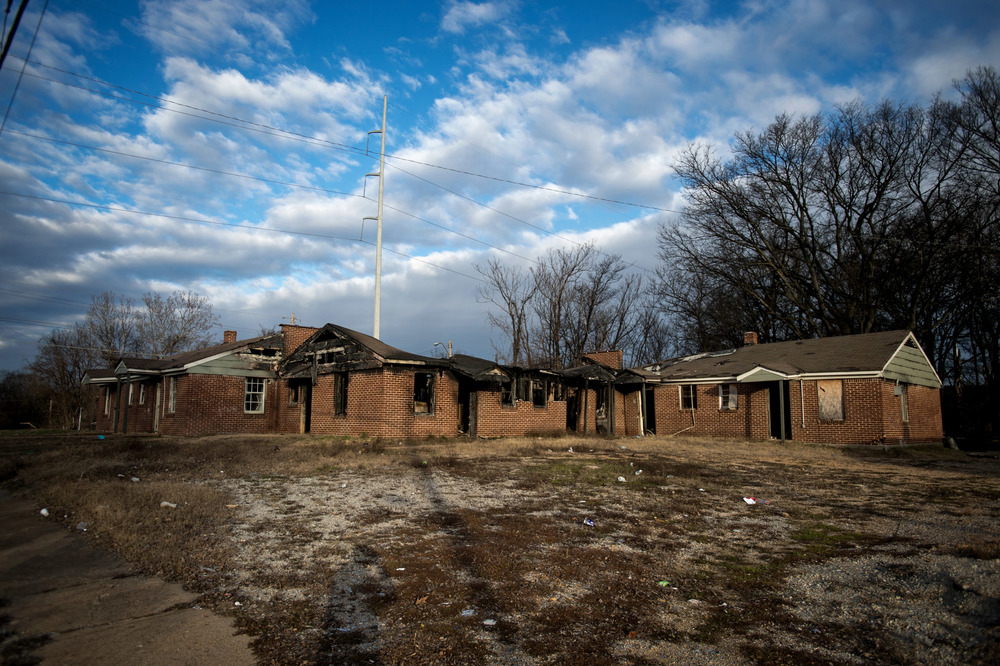 Police sirens wailed somewhere off in a safe distance from the usually quiet North Memphis street. But the sound swelled slowly, until it was down the street and then right outside, piercing the calm and alerting neighbors that trouble had come to their front doors.

If those neighbors got to their windows in time, they would have seen a man running from the police. If they had a second to think about it, they would have known exactly where that man would try and hide — the burned-out house.

“Everyone in the neighborhood was scared,” said Steve Barlow. “Who is this person? What is he doing in that burned-out house? Are they about to have a gun fight in the middle of my street?”

In the end, the situation ended peacefully. The police arrested the man and calm returned to the neighborhood.

But for Barlow that wasn’t the end of the story. Nor was the arrest the ultimate solution to the problem for those North Memphis neighbors. Something had to be done about that burned-out house.

Barlow battles blight in Memphis on a daily basis and has done so since 2007. Memphis’ daily newspaper, The Commercial Appeal, profiled him last year in a story headlined, “In the universe of Memphis blight fighting, all roads lead to Steve Barlow.”

But Barlow shies from descriptions that label him Shelby County’s blight go-to guy. Instead, he mentions a long list of organizations like the Memphis code enforcement division and allies like Shelby County Environmental Court Judge Larry Potter.

With go-to status or not, Barlow didn’t set out to be a blight fighter.

Through his work with the Lemoyne-Owen College Community Development Corporation starting in the 1990s, Barlow saw first-hand blight’s negative effects — and the positive results achieved by getting rid of it.

He graduated from the University of Memphis law school and found a position in one of the city’s biggest firms.

Working blight cases as a profession didn’t occur to him until the early 2000s when he attended the National Vacant Properties Conference. At the conference he met people working on blight issues day in and day out. To his surprise, many of the leading thinkers in the field were lawyers.

“I thought ‘wow,’’’ Barlow said. “This is something I could dedicate a legal career to in Memphis and it’s a huge problem and a huge challenge.”

The organization that hosted the conference became the Center for Community Progress (CCP), the national blight elimination think tank that is a partner in Memphis’ battle against blight.

“A basic foundation in the community and for people is that they want to feel that their community is clean and that it is safe,” said Lee in a CCP video outlining its mission. “So this issue around vacancy, abandonment, and blight on a community is something that goes against people’s basic needs for clean, safe neighborhoods where they feel comfortable raising their family.”

Barlow began working in earnest on blight problems in 2007. At the time, code enforcement in Memphis was in “disarray.” The tax foreclosure process was lengthy and vague. There were no clear paths to getting rid of problem structures.

But Barlow dug in. He filed the city’s first ever lawsuit using the then-new Tennessee state law called the Neighborhood Preservation Act. That law remains at the heart of the civil litigation he uses to handle problem properties.

The organization was formed to serve as a court-ordered receiver of blighted properties abandoned by absentee owners. Since then, it has also become a policy advocacy group that lobbies for blight elimination legislation and advises local governments on blight matters.

Since Barlow’s first lawsuit in 2007, the blight story is turning around here. Last year Memphis officials announced 1,000 lawsuits had been filed against owners of blighted properties.

This is evidence that the city has made “huge strides” in its blight elimination efforts, according to Barlow. The city’s code enforcement agency is undergoing a complete reorganization. The tax sale process in Tennessee has improved, with the post-tax sale redemption period reduced from one year to 30.  Anew land bank has been established in Memphis – the “Blight Authority of Memphis” – which promises to be a major new force in addressing vacancy and abandonment.  .

There’s no doubt blight remains a huge issue in Memphis. For evidence, look no further than the fact that blight (and what to do about it) was a major issue in last year’s election for Memphis mayor. But Barlow and his team continue to work on it day in and day out.

For him, the work is about more than nice words in a newspaper story. It’s about the business owner who doesn’t have to look at decaying, abandoned hotel or the neighbors who don’t crouch in fear because a criminal has run into the burned out house down the block.

But even more, it is about strong, healthy neighborhoods and economic prosperity.  And about justice.

“No property owner has the right to abandon his or her duty to maintain property in decent and safe conditions,” Barlow said. “Every surrounding property owner should be outraged that any property owner gets away with abandoning or neglecting their real estate. I feel like it is my job to be sure irresponsible owners are held accountable to a very high standard of property maintenance.”

Eliminating blighted properties has been proven to have a direct positive impact on the local economy and the quality of life of all who live and work in a community,” he said. “If we want to achieve growth and prosperity in all Memphis neighborhoods, a sustained effort will be required to repair the damage caused by vacant and abandoned real estate.”